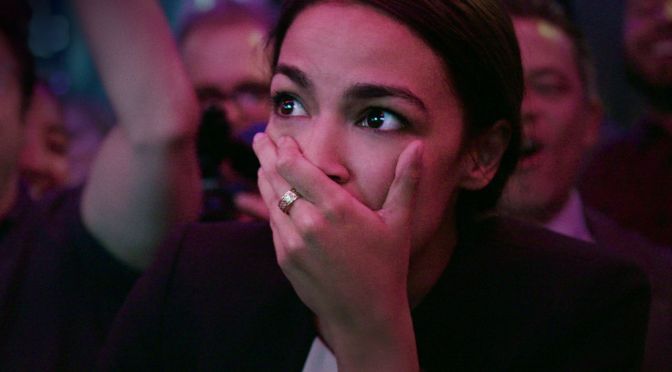 Give it a day to marinate, and Knock Down the House will probably make you angry

There’s a scene in Knock Down the House of Joe Crowley in a crowd, and it kind of says it all.

Crowley is, at that moment, a ten-time Democratic incumbent and chair of the national caucus. He’s talking in a genteel voice to the crowd, and someone says his challenger in the midterm primaries, Alexandria Ocasio-Cortez, is stupid.

She’s not stupid, but thank you, Crowley says. There’s a smile plastered on his face. He’s a career politician, and AOC is just a fringe player. When he talks to her later, he uses the same genteel voice. Thanks for participating in our democracy, he tells her. He might as well pat her head.

This is the plight of the four women in Knock Down the House, all backed by progressive PACs and trying to knock down establishment Democrats. They’re smart, capable, and trying to get people to take them seriously in a system that’s clearly skewed against them. And although only one of them wins (you know which one), it’s an informative look at campaigns regardless.

Cori Bush, a pastor and front-line Ferguson protester, is running against Lacy Clay, who’s been in congress for 18 years. Paula Jean Swearengin wants to take down Joe Manchin, who’s been a politician since 1982. Amy Vilela is running in Nevada, where the incumbent stepped back after sexual harassment allegations. Her daughter died after the family couldn’t afford medical tests, and she’s generous, heartbroken, and pissed off. This is the era of Trump though. To some degree, they all are.

The candidates assemble young, diverse teams and collect votes like marbles. Bush, who’s as charismatic as Ocasio-Cortez, stands for a photo shoot but looks like she’d rather be out organizing. Swearengin grabs a chainsaw and clears brush around a little house in the West Virginian mountains so she can hold a campaign event there.

It’s not enough to walk away from it feeling good that they tried. They want more than that. So do we.

This film is in love with AOC, and it’s nowhere close to even airtime. It veers toward being a campaign piece sometimes, so much does it let her expound, prosthelytize and think out loud. The filmmakers didn’t even know she was going to win when they started filming. Given that we do, it makes some of the scenes more interesting.

Observe, for example, her appearance at a community meeting in a Bronx gymnasium a week before the election. Crowley doesn’t show up, sending a New York City council woman in his place, which comes across as a cheap attempt at diversity with the locals. The annoyance crackles in AOC’s eyes. Finally he agrees to debate her on TV. He’s going to try to make me seem small, she says, and of course he is.

Political junkies will enjoy the nuts and bolts of Knock Down the House, like Ocasio-Cortez picking apart the wording of Crowley’s flyer. Without her victory, this film would be too sad and frustrating. It’s not enough to walk away from it feeling good that they tried. They want more than that. So do we.

Rachel Lears made this film after raising $28,111 on Kickstarter. It premiered at Sundance in January and on Netflix in May.

Postscripts: the United States ranks 98th in the world for women in politics. Also, Crowley is now a lobbyist. 3.5/5

Quote of the week

“Another belief of mine: that everyone else my age is an adult, whereas I am merely in disguise.”